Experience the last hours of Jesus Christ’s life
Donate!
Eastern Reenactment displays historical events that took place more than two thousand years ago in Jerusalem before Easter.
About 300 costumed characters immerse you in the atmosphere of antiquity. 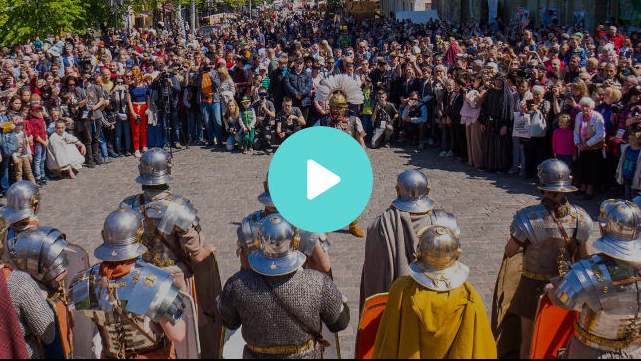 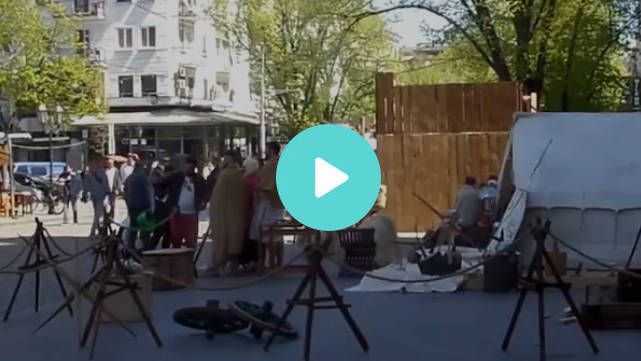 On Deribasivska street – the main street of Odesa – on the eve of Easter, thousands of citizens and city guests gather to see and experience the last hours of the life of the Savior Jesus Christ.
The atmosphere of the event allows everyone not only to observe but also to take part in Easter events.
For several hours, the main street of the city turns into Via Dolorosa. The Way of Suffering is divided into segments of voiced scenes in which the dramatic events described in the Bible unfold.
The procession ends with the final scene and viewers can see the moment of the crucifixion and resurrection of Christ.

The directors, screenwriters, and main actors of the Easter Reenactment are deeply religious people and dedicated Christians. The whole plot of the last days of Jesus Christ before Calvary is described in the New Testament and became the basis for the scenario. Each role reveals a human character and the reaction to the touch of God. According to the directors' plan, anyone at the event can identify themselves with one of the Bible characters. The essential point of the event is the choice between accepting Christ and denying Him.

Historical costumes are sewn according to old patterns, based on iconography, using the style of the 1st century. Reenactors and costume designers provide their guidance during the tailoring. Each costume is made of natural fabrics (wool, linen, homespun fabric). Around 300 costumed characters fill the central street of the city. The organizers provide an opportunity for anyone to become a costumed character of the procession and take part in the Reconstruction. Odesans sew costumes for the procession on their own, using the patterns and following the advice of the event's dressers.

Ukrainian military-historical club of Rome reenactors Vexillation of Roman troops of Lower Moesia is camped in the center of Odesa 4 days before the Easter Reenactment. Reenactors from different countries come to the camp and acquaint passers-by with the history and everyday life of Roman soldiers. Legionnaires cook their food on the grill, an exact replica of one found in Pompeii. Their diet consisted of natural products that were used and cooked in the 1st and 2nd centuries AD. All cutlery, dishes, and household items are identical to that period. Moreover, the camp has an ancient Roman carroballista – a weapon that fired darts – from the era of Emperor Troyan of 1-2 centuries AD. It was recreated from the remains of similar structures found at different times in Romania, England, and Germany. The whole process of reconstruction of the carroballista took more than 3 years.

Also, one can see how the Roman soldiers had fun playing latrunculi, or simply latrones. Latrones is a dice game reminiscent of modern chess. The game is extremely interesting for the audience. The image of a Roman healer who makes tinctures and teas in front of the audience has been recreated in detail.

To experience the life of a Roman legionnaire at its fullest, everyone can try the porridge of an ordinary soldier. The recipe is simple: lentils, lamb, onions, garlic, a mixture of Italian herbs, and olive oil.